You can prepare for a successful Ironman Triathlon with a program that has an average training volume of only 12 hours per week and a briefly-maintained peak training volume of 16 hours. And by “successful” I don’t mean finishing alive. I mean covering the distance as fast as your genetic potential allows. In fact, I believe that many triathletes can race a faster Ironman by following a well-constructed 12-hours-a-week program than they could with a higher-volume approach.

There are five specific reasons a minimalist approach to Ironman training can work just as well as, if not better than, a higher-volume approach:

1. Swimming performance is all about technique, not fitness

Very little improvement in swimming performance comes from building swim fitness through hours of training. Almost all swimming improvement comes from technique refinements that often occur instantaneously. You should swim train for an Ironman in a way that encourages and accelerates technique refinements instead of in a way that concentrates on building fitness. Get one-on-one stroke coaching from a qualified swim coach, study freestyle technique (youtube.com is a good source of technique videos), fiddle with your stroke, use swim aids that encourage technique development and do technique drills for body position, rotation, efficient breathing, a strong pull and efficient kicking. Use intervals and sustained swimming primarily to ingrain technique and secondarily to develop fitness.

2. The swim just isn’t that important
To complete the swim leg of the Hawaii Ironman as fast as your inner talent allows, you would have to train in the pool two hours a day, six days a week, or thereabouts. That’s what it would take to shave off every second possible. But the swim accounts for only about 10 percent of the time it takes to complete an Ironman. And you can get at least 90 percent of the way toward your fastest possible Ironman swim split by swimming just one hour a day, three times per week. So why not do that? 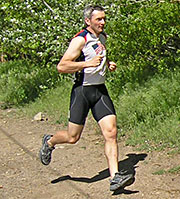 When I trained for my first Ironman in 2002, my run training was severely compromised due to injury. My race took place in mid-September.  Through July I averaged just 15 miles of running per week. Not until five weeks before the race was I able to do my first “long” run: a 12-miler. I squeezed in a 16-miler and a lone 20-miler before race day.

Despite these limitations, I was able to run a 3:23 marathon at Ironman Wisconsin—not as fast as I could have run with better training, but faster than all but 42 other participants in the race nevertheless. The reason, I realized, was that my excellent cycling fitness carried me through the run.

You can count on the fitness crossover from cycling to running to trim back the amount of run training you do in preparing for an Ironman. One long run, one high-intensity run and a moderate, steady base run (to which more advanced athletes can add a threshold progression or a sprinkling of fartlek speed intervals) each week will suffice. You may also do one- or two-mile transition runs after bike workouts to prepare for the specific challenge of running off the bike.

4. High-intensity indoor cycling is time-efficient and effective
Cycling predominantly indoors can be an effective means to develop a higher level of cycling fitness with a substantially lesser time commitment to training than cycling exclusively outside. Riding indoors requires less set-up time and entails fewer stops than outdoor riding. It is also more intense—heart rates are always higher on an indoor trainer because there is no momentum and there are no downhills. Finally, the indoor cycling environment is more controlled and more conducive to high-intensity riding.

There is a small trend of predominantly indoor bike training at the top levels of triathlon these days. Andy Potts, the 2007 Ironman World Champion, typically rides outdoors only once a week. His five or six other rides are indoor workouts featuring lots of lung-busting interval and threshold efforts and lasting only 45 minutes each, on average. Tyler Stewart, who has the fastest women’s Ironman bike split in history (4:47:59 at Ironman Florida in 2007), gets most of her bike training in the form of 90-minute interval-based indoor workouts that she teaches for other triathletes and cyclists. Like Potts, she rides outdoors just once weekly and she completes only a handful of rides longer than four hours before racing an Ironman.

I’ve recently adopted a similar approach to my Ironman bike training, and with excellent results so far. Each week I put in five rides on a CycleOps 300PT indoor trainer. Each of these rides is 30 to 45 minutes long and two feature very challenging high-intensity work. On Saturdays I hop on my Kestrel Airfoil and ride long. My power numbers are as high as they have ever been, but my time commitment to bike training is much smaller than it has been in the past. Try it and you’ll see.

5. A dozen century training rides won’t give you much more cycling endurance than two or three
I just mentioned that the fastest female Ironman cyclist in history completes only a handful of four-plus-hour rides before competing in an Ironman. This practice is in contrast to that of many competitive Ironman triathletes, who start doing multi-hour rides months before race day. But Tyler Stewart’s success proves what common sense would suggest: that it’s simply not necessary to do a ton of long rides that are close to the Ironman bike leg distance to build the cycling endurance needed for a successful Ironman.

If you build a solid foundation of cycling fitness by doing a lot of the hard threshold and interval training that so many athletes avoid, and by regularly doing fairly aggressive long rides in the 2.5- to 3.5-hour range, you can easily extend the range of your pedaling power to encompass the full Ironman distance by incrementally increasing the distance of your weekly long ride from, say, 60 miles to 100 miles through the last eight weeks of your training preceding your taper. With this approach you will cultivate adequate endurance without doing so at the expense of pure power, and with minimal risk of burning out, and, not least importantly, without wasting a second of your valuable time.

Matt Fitzgerald, is a journalist and author specializing in the topics of health, fitness, nutrition and endurance sports training. His work appears regularly in publications such as Runner's World, Triathlete, Her Sports and Running Times. He has also authored and coauthored numerous books, including Triathlete Magazine's Complete Triathlon Book, which has sold more than 60,000 copies since its publication in 2003. In addition, he has designed numerous training plans for runners and triathletes. Learn more at www.TrainingPeaks.com.